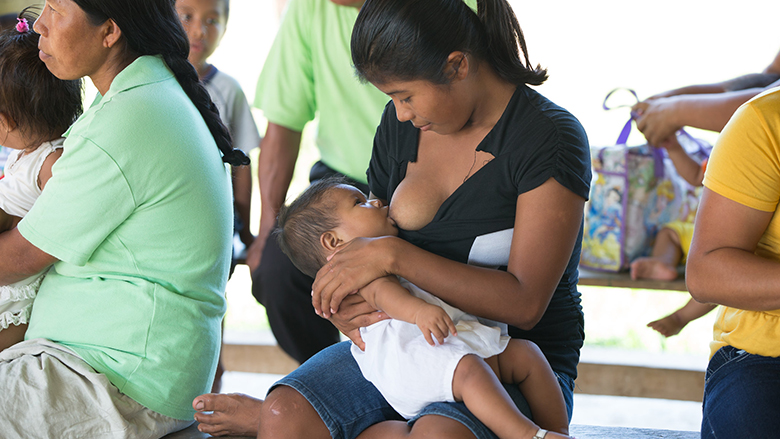 A woman breastfeeds her son in Panama

Parents, families, and employers should support mothers who breastfeed to improve the health of the population and help children reach their maximum potential.

A supermarket, an airport, a hospital, a workplace, a park, even in their own home — these are some of the places where women need support to breastfeed, ideally with spaces that guarantee their comfort and, above all, are free from disapproving stares.

The lack of public policies coupled with limited information and inadequate environments are putting breastfeeding at risk. Currently, only around 40 percent of infants aged six months and under are breastfed exclusively, according to the World Health Organization (WHO), a percentage that hasn’t changed for decades.

This low rate of breastfeeding is costing the world some 0.5 percent of its potential gross income, a total loss of at least USD 302 billion annually. Why? Because consuming breastmilk prevents allergies, asthma, diarrhea, diabetes, obesity, and other diseases that threaten the health of infants. Breastfeeding also helps prevent breast and ovarian cancer, type 2 diabetes, and heart disease in mothers. All of these diseases put pressure on health systems and diminish the productivity of individuals.

This is not a minor issue. Increasing breastfeeding rates to nearly 100% of infants could save more than 800,000 lives every year, most of them children under the age of six months, but also mothers.

World Bank studies have found that efforts to promote and protect breastfeeding cost an estimated USD 600 million annually worldwide, but the potential economic benefits would amount to USD 30 billion a year over the next decade. This is a return of approximately USD 35 for every dollar invested in promoting and supporting breastfeeding.

There are very few “investments” in development that can match that rate of return, Annette Dixon, vice president for human development at the World Bank Group, wrote on her blog post "Breastfeeding: A foundational investment in human capital."

The WHO reports that mothers are much more likely to breastfeed when the practice is promoted, protected, and supported. This means they should receive support from the beginning, in the clinic or hospital, then at home by training mothers and fathers, and later, in the workplace.

In the context of World Breastfeeding Week, here are a few recommendations:

In the clinic or hospital:

According to UNICEF and the WHO, everyone benefits from extended breastfeeding: children, parents, the community, and, in particular, employers.

Paid maternity leave allows mothers to provide optimal care for their children in the first six months of life, reducing the absenteeism of mothers from work. This in turn increases their participation in the labor force, motivates staff, and boosts productivity.

Latin America and the Caribbean is lagging in these recommendations. According to the World Bank, the region has an average paid maternity leave of about 90 days, or 12 weeks, less than the recommended minimum of 18 weeks or, preferably, until the baby is six months old.

With appropriate public policies and the support of employers and communities, the low rate of breastfeeding can increase and help families create an enabling environment for the development of all children.